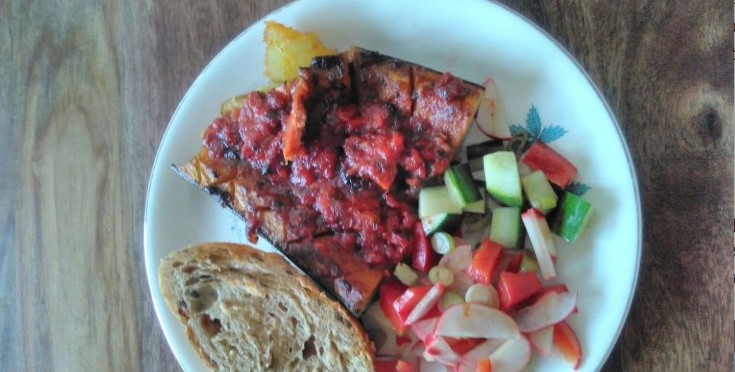 When does a courgette (or zucchini to our American friends) become a marrow….

When you go on holiday!

In our little journeys into growing your own, there’ve been lots of surprises. Certainly the biggest (by weight) surprise has been the mad expansion of our courgettes whilst we were on holiday!

We returned to harvest seven handsome marrows and promptly realised we had no idea what to do with them.

Look at these beauties, the 1st seven weighed a total of 10.5kg!

Here’s what we’ve been doing to beat the glut without getting bored; if you have recipes to add we’d love to hear them.

Our first point of call was roast marrow. We had two tries at this, both turned out well but definitely the second was best.

We found that the falafel went crispy on top and steamed underneath, which is what we were after. However we concluded the marrow was not too interesting on its own and could really carry more flavour.

Definitely go overboard on the paprika – the resulting oil paste soaks down the scored sections and gives the marrow colour and flavour. We loved this and it stored really well for lunches.

Next we dealt with another two by giving them to friends who eat healthily, but don’t have a growing patch of their own. One of them tried roasting their marrow with nut roast stuffing which they highly recommend. The other is still considering their options…

We also made our normal bolognese recipe (lots of veg, soya protein instead of mince) and put most of a marrow chopped up in that as a nice bulker. It’d also disappear into soups in a similar way.

I enlisted my work colleagues to eat and rate V1 for me and came up with V2 today. Based on the feedback, this is my optimised recipe. It comes out sticky and with a powerful gingery kick, I recommend it as a loaf cake but it also works as an iced circular cake.

As we all know, cake is a serious business and benefits from the application of SCIENCE (or at least, graphs) and so here is my peer-reviewed cake:

Based on this I put more ginger and more marrow into version 2!

Our Mums have been sending us lovely recipes and we’ve also had some recommendations off friends. We want to try courgette fritters, spiralised courgette noodles, ratatouille, and much more besides. But that is a matter for to-marrow…

The Situation Is Now Under Control

Its been a bit of a marrow-thon, but of our mighty glut only one marrow remains – handily when they get big their skins get thick, so it’s safe to store it for a couple of weeks. In the meantime our courgette patch has been giving us civilised normal sized courgettes which are sweeter and firmer. These are now slotting into our normal cooking habits (steamed with a meal, fried/roasted in slices, grated in salad, chopped in risotto) and saving on our grocery bill!

One thought on “Don’t feel Marrow-se about your courgettes!”