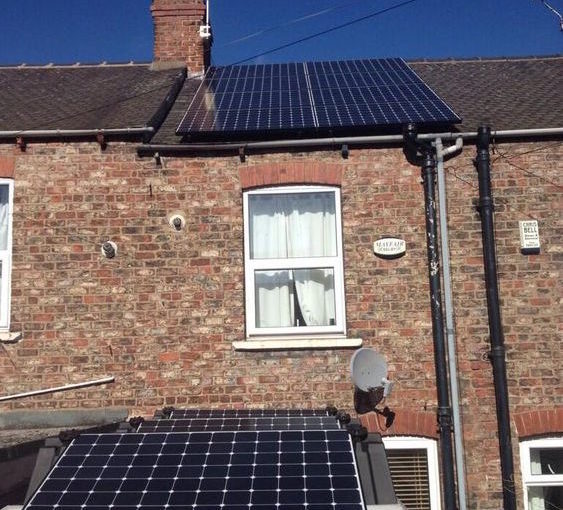 Recently we were asked to be part of the York Green open homes! This has caused me to reflect a little on our initial goals and how we have fared. As we spoke about in our first blog/“about” section, we are extremely frustrated by the how inefficient the homes we have lived in are and what is classed as affordable housing these days.

Essentially our goals were to make a home nicer to live in, making it more energy efficient and more sustainable at the same time. Quantitatively, we aimed to do this via spending ~10% of the value of the house on energy saving and producing measures that would allow us to meet the “A” grade EPC standard. As we’re doing Green open homes, i’m going to try and briefly highlight the rough interim energy and finical costs of the project.

As an attempt to preempt what i expect will be the biggest FAQ, i’m going to try and outline the money side on the project. To be 100% clear this is rough estimate. Although we can talk about the money and carbon case generally, honing down more figures is challenging as we don’t really have a good handle on the house’s prior performance. This is because we started doing our retrofit slowly from day one, we don’t have any data before we moved in, and then had an some alteration re-done by an insuracne company. This is a broad (very) rough attempt at approximating what we’ve achieved so far. In a year or so i will have enough data to do this more robust, but is i suspect the money side of things is a big questions for people so here it goes…

The (estimated) overview Financial Case for our EcoRetrofit
It make me a little uncomfortable giving away such exact details… but as everyone asks because it is a litmus test for the project’s success and since we live in the age of Zoopla it’s not like its difficult to find out anyway.
So we bought the terrace for £121k, this was the bottom of the market for houses close to central York. There were some issues, like a leaky roof and a damp problem, which is relatively common for a house of this age and type. Following our eco-renovation, the house was recently re-evaluated to be worth £145k, an increase of £24k (20%). This far outweighs the cost of all of the energy improvements (~£12k). The attribution of the increase in value is challenging as the housing market has increased the price as as-well as the renovation, but as zoopla tells me this is 10% it is fair to say the eco-renovation played a part although the percent due to the “eco” and “renovation” part of the eco-renovation is unknown. However, it is important to caveat this with the obvious fact that until we sell the house (which we currently have no intent to do!), we cannot know for sure that this increase is real.
The real savings that will payback the cost of doing all the work are seen through the bills (assumed at £26/month, 50% usage at house). For the first year after installing the panels our bills total of ~£37/month for electricity and gas, which is paid for in excess by income from the PVs (~£60/month, albeit offset as one payment is quarterly and the other is monthly). These bills are low, for a house our type i would estimated expected bills to be £700-900. I predict these to increase after next winter as we essentially had just electric heaters this winter due some issues with the boiler, although with that said the electric heaters are more expensive per kWh, but regardless it is low.Getting the money to do these kind of work and the upfront nature of the costs often deters people. We paid for the work using a mixture loans, savings and income https://pharmaciepourhomme.fr. With current interest rates low borrow money if someone is willing to lend it currently. So this shifts paying back for the cosy/cheap to run house to over the payback period. The government “Green Deal” scheme could be an option for many and it has been extensively discussed on the internet, including on MoneySavingExpert with some great worked examples, energy saving trust, and YouGen. The point needs to be made though that a lot of improvements that have a large impact are cheap like managing drafts or made very simply subsidised/free by the government such as installing loft insulation.
Best & worst of our larger choices
Best of our larger choices: Photovoltaic Solar Panels
The solar panels (PVs) are out performing our expectations. Not only in energy production (130% of consumption in the first year), but also in the impact on our bills. The payback is currently less than 7 years and could be lower if the we use more at the house rather than sending it to grid. This would be easy if we had hot water tank, as you can just route the excess electricity to heat the water that would have been heating by gas or electricity for baths etc later in the day. For us it is more likely that a battery storage system like Ecotricity’s Black Box, Tesla’s PowerWall or Enphase’s energy storage system as our consumption is majority through electricity.
With a guaranteed lifetime of 25 years, and even if the panels do degrade by ~25% in output terms over this period (maxim allowed by warrantee), its hard to imagine them packing up straight after this. I’m intrigued to see how they fare over longer timescales, but just taking the next 20 years that they receive government subsidy they represent a huge saving in carbon dioxide emission
On the carbon side, they have already paid off their carbon from production. We’ve recently done a lifecycle assessment on the panels, and will post this shortly. Without giving too much away it looks good, and depends heavily on the choices of how you treat the export of electricity to the grid from he PV panels.

#PV production firmly in the high region (Mar-Sept). A battery (~10kWh) would easily pull us of grid these months. pic.twitter.com/h7bTsCzOaM

Worst of larger choices:  Upgraded Boiler (D=>A)
We weren’t naive about this, but this was a compromise we had to make. Although we were told, and i know others often are, a new boiler is the best action. for low users like ourselcves the enormous cost of a new boilder (£2.3k, installed), just doesn’t add up. And thats not even considering the embodied energy cost of new boiler. The boiler broke whilst i was working out of the country and we had previously refused to upgrade against recommendations, along through the tick box exercise of EPC certificate  this and the TRVs have pushed us firmly into the A category.

Financially the payback can only come from savings. Considering our gas bill is currently ~£10 a month (although, i expect this to rise to £15 a month),  this is basically impossible. This is low as our shower is an electric one, we may not keep our house as hot as some do, and hopefully some credit to all of our eco-renovation efforts! I estimate the payback period for the boiler to be greater than the current UK life expectancy. The last boiler was only 5 years old (Chaffoteaux et Maury, Minima Mk2 30 FF), and although we’ve got for a more reliable model with 10 years warrant (Worcester, Greenstar 28) i won’t be holding my breath.

From an environmental angle, even though we are on biogas tariff, we pull from the main grid and this essentially still fossil fuel. On this count an air source heat pump would actually have been better, but for cost reasons and due to working out of the country at the time we needed to replace the boiler it wasn’t an option. I remain skeptical this technology and would prefer ground/water source for energetic reasons if we had the space, although I have friends who are convinced.

Any lingering thoughts, Would you do this action again to another house?

Yes. On the financial side alone it was definitely worth our while over a 6.2 year timescale (with less than 4.5 years remaining). Over long the financial case gets stronger. If we include other qualitative improvements like how draughty/cosy the place is then the yes is even more resounding. The smaller and cheaper changes will have contributed a lot to this. I will be able to do a better analysis when i have more data, from which the real savings in energy consumption and costs can be calculated.

I’ve just tried to outline the broad money side of our project with a few examples. But i can’t personally do this without pointing out that “Externalities” (e.g. costs of air quality) of conventional heating/Electricity options are thought to be huge. Although we pay for these via our taxes etc, it is important to bare that in mind ( a back of the envelope calculation gives air-quality costs as £250-850 per person per year, which is from £16–54 bn in costs and ~64.1m people ). Trying to look at more of the picture (but by no means all!) rather changes the way we can see the economics of energy pricing.

Its is challeneging to express quite what a improvement it is to live in a warm cosy house without huge cost ( energetic or financial ). It will be possible to quantify this in the near future, and there are some great examples of projects that have managed this ( like a carbon coop project with @zapaman in Manchester ). Here’s to cosy, more sustainable and cheaper living!

Links
Disclaimer: I am not a financial advisor and do not work in finance. This article links to research/information I’ve found and expresses my own opinions and experiences. I hope it is useful to you but in no way am I offering financial advice or recommending a particular course of action. If you’re considering any investment you should seek information from a wide range of sources and speak to an independent financial advisor before making any decision. I’ve tried to be as accurate as I can, and when prices have been quoted those were available openly on the date of publication. If you see any errors/broken links/have any comments please just drop me an email or comment.

One thought on “Mid-Terrace to Mid-Terrific!”