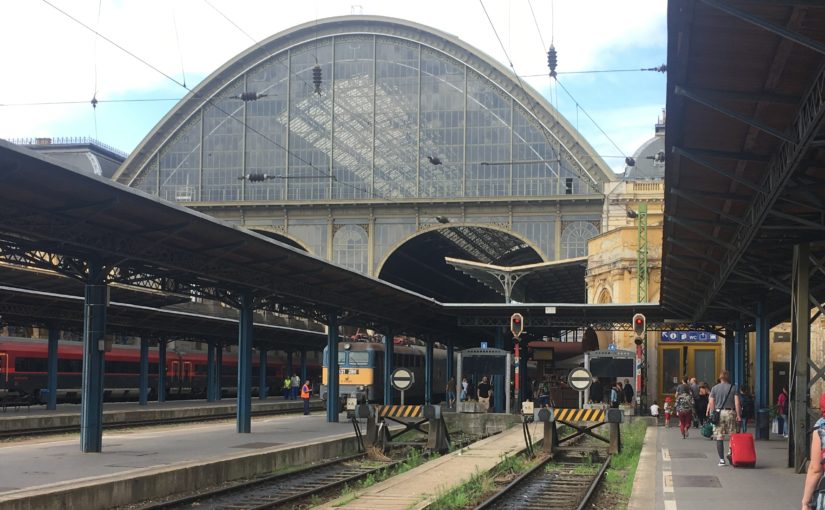 Now that the evenings are darkening it’s a good time to look back at our summer holiday this year, a big trip to new places and excitingly our most ambitious train-based journey yet! Our train trip:

I want to share this journey because it took us from UK to exotic Mediterranean places without a plane involved. Often in conversations about avoiding air travel to reduce your carbon footprint dramatically (see graph), people seem to assume this condemns you to endless rainy caravan weekends. Whilst there’s a lot of great places to visit in the UK you needn’t limit to these shores; holidays can be flying-free and adventure-filled.

Most people know that plane journeys are more carbon-emitting than train journeys but sometimes they think it’s a small difference, or a low-impact decision for their carbon budget overall. But as you can see from this comparison, the train journey was led to vastly less carbon (in this case ~75% less according to ecopassenger). If I run up my carbon footprint on WWF with holidays done by train, my footprint for this past year is 8.2 tonnes of CO2. If I run it with exactly the same lifestyle etc. except for 2 holidays done by flying (one EU, one non-EU), my footprint for this past year increases to 11.7 tonnes of CO2. So a couple of return flights each year would increase my footprint by over 42%, and would then make up about 30% of my yearly emissions. That’s a lot of environmental impact coming down to the seemingly small decision of how to go on holiday.

This holiday was a 2nd exploration of the Balkans; we went to Slovenia, Croatia, and Bosnia & Herzegovinia in 2016 and were so impressed by the variety and beauty of the area that we decided to come back to explore Serbia, Montenegro, and spend a final week back in Croatia again windsurfing. On that 2016 trip we went out by train and back by plane; on this trip we felt emboldened by how well it had gone and wanted to do the entire trip without flying.

Our route out was to Belgrade, Serbia, and our route back was from Hvar, Croatia.With big routes it can be tricky to work out where to start; I began with the biggest chunks of distance and filled in the gaps later. The Eurostar and TGV to Munich was a known route already. Our trusty source, Man in Seat 61, gave different options for Munich to Belgrade; I chose the Hungarian Sleeper to Budapest because that used our sleeping time most efficiently. Then a train down from Budapest to Belgrade.

On the return I initially ran into the same problem as in 2016; there isn’t an easy way to get onto a long distance train from the Split area. This is partly why we flew back then. But we hadn’t realised back then that the ferry links are very strong. Instead of trying to go straight back over land, I booked an overnight ferry to Ancona in Italy. From there we got the train to Milan, then the Thello Sleeper from Milan to Paris, and a quick Eurostar hop back to London.

It costed the same as flying

Another concern that comes up is thinking that the train will be much more expensive than flying. Sadly in the UK trains can be quite pricey, if you’re not booking in advance, and if you’re comparing a peak time UK train to a budget destination flight then indeed that’ll be unfavourable to train travel. However on the continent trains are much more reasonably priced, and flights to unusual places slightly off the beaten track (like Belgrade) or ultra-touristed (like Split) are not so cheap. Anyway, in this particular instance I ran up the prices vs. plane options and came up with this:

The train price and plane price were very similar, so it was an open choice either way, there was no cost barrier to us taking the train. We could have got cheaper trains if we’d booked a bit less last minute and the plane could have cost us ~£50 more, or ~£30 less, depending on how we handled travel to and from airports. This is often overlooked as a travel & time cost, and whilst it’s possible to do airport transfers cheaply if you are willing to give up additional time to use local buses etc. one of the things we really liked about going by train was arriving right in the city centres and being able to get exploring straight away.

We got time to walk around exploring in 7 countries

If you fixate on the destination, you miss an opportunity. Taking the train means you will take 2 days or more solid travel to cross to eastern side of Europe, vs. a matter of hours on the plane. But with a train, you can break your journey; take the different legs at your own pace, explore different places along the way. We decided to stretch our return journey over 4 days. We got to spend an afternoon in Split, a day in Ancona, a day in Milan – we’ve never been to Italy before – and a day in Paris (which, admittedly without planning, happened to be our wedding anniversary!). On the way out, we met a friend for dinner in Munich, and we spent a couple of hours walking in Budapest. Rather than 3 headline countries in our holiday, we got to enjoy time a dazzling array of places, all so different. When I got back from this holiday it was unusually difficult to tell friends where I’d been!

This trip was the first time we’d ever taken sleeper trains, and they turned out to both be comfortable and quite exciting – waking up in a new place was really fun. In particular we got from Serbia to Montenegro via another sleeper train and woke up as we were coming down from the mountains to incredible views. This is reportedly one of the most beautiful train routes in the world! Not bad for £30!

There are some quirks

Each country’s train system is a little bit different, plus we were travelling through some areas which use the Cyrillic alphabet which meant everything looked a bit disorienting to us. Mostly the little quirks are endearing, sometimes they are humorous; for example Serbia hasn’t set up a way for people outside the country to buy train tickets. You cannot buy them via any official route yourself, you have to contact a Serbian man named Mr Popovic who buys them for you! (Which, counter to our skepticism, worked surprisingly well!)

Each trip was simple, but taken together they were a bit of admin

Making it all line up required a bit of thought and some spreadsheet magic. I used a visual itinerary to make sure I had it all correct before I booked everything:

I’d definitely recommend getting it all planned out and then just digesting it for a bit before booking to make sure you haven’t missed anything. Also to get the best prices means booking with different sites so that aspect is more complex than an equivalent flight.

A bonus of having time to explore each location was it built in redundancy to our schedule in case anything was late, but it wasn’t required; in our experience trains on the continent are exceptionally reliable. The only one which caught us out was Budapest to Belgrade, which was running to timetable but was exceptionally slow-moving, we hadn’t realised and would probably take a coach for that leg if we were doing it again as it would be faster.

Will we do it again?

Absolutely! We’ve got more big ideas for future train trips – if you book well in advance then cheap tickets to Paris can connect to sleepers out to Italy and beyond. We will definitely be using the trains again but we’ll be off to new destinations and new adventures next time!

One thought on “Highly Train-ed Holidaymakers”