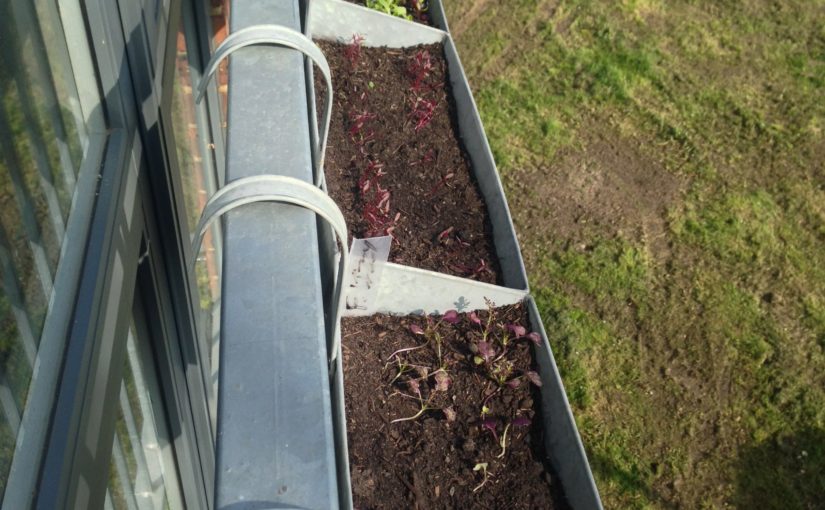 After looking at our carbon footprints via a nice (and relatively quick ) tool called REAP-Petite a while back, we realised that food was an area we needed to really work on. When life moved us to be based in west London, getting a home with a garden was off the cards, as it is for most. However, we’ve found that we can get a remarkable crop just from some window boxes (even through the winter once!).

We’ve also been looking at a load of other things to bring down our food carbon footprints, including setting up a local Suma wholefoods buying group, exploring new veggie/vegan recipes, and trying to take our growing a bit further. So here’s a little post on seeing our first attempts at food production skyrocket…

We just have a “Juliet Balcony”, so there isn’t somewhere outside for us to put plots. If you do have somewhere for boxes, then many people have shown that you can really produce a lot! (e.g. @VerticalVeg, who grew £900 of veg in six foot of space in London) We started with four boxes. There were a lot of options (including much cheaper ones), but we ended up choosing ones in zinc to fit with balcony for ~£15 a pop (links at end of blog).

Since this was our first attempt we just jumped in and got supplies from shops near us, hopefully with time we’ll get a better idea of what works well. We also choose to focus on the more expensive and “easy to grow” crops of cut-and-come-again lettuce, rocket etc. After getting the boxes, next on the list were seeds and compost.

We started with four boxes, then expanded to five to use the whole top balcony rail. I’m still deciding whether to put up the second row, which would double the amount we could grow. The really essential addition, post buying off-the-shelf boxes, was drilling a line drainage holes about an inch up on each side of the boxes to make sure the soil didn’t get too wet (photo below).

First we planted up baby spinach, rocket, cut-and-come-again salad leaves and some herbs. These grew well and even through the winter in the first year (2015 was mild). We’re still amazed with how much grew and the sheer amount of salad that we had. Considering the kind of salad we were growing  would cost around a £1 or more a bag in the shops (e.g. rocket and mixed leaves), the savings/worth per week could probably be ~£3 or more.

We did have a time when we got a lot of coriander, more than could be used at once.  However, we found that any extra is easily preserved and led to some interesting recipes (e.g. see this guide on 5 ways to preserve ‘Cilantro’).

However, after our thoughts of giddy success our vigilance dropped and we failed to notice the drainage holes were slowly blocking up. We then re-seeded the plots with only an little extra compost, but the seeds didn’t even really germinate. This was in all likelihood due to the soil just being used up and we started looking into how to improve the soil choose to add some fertilizer (100% Vegetable ingredients), which improved things. Window boxes are a very different eco-system to growing in soil and we probably had naively not though about this enough… We were kindly given some small herb plants too which got us going again. However the streak did not continue through the winter as it was harder that 1st year we have done this and the drainage still wan’t good enough so we lost our herbs and our salad stopped growing.

So we’ve had some highs and lows, but are learning slowly how to keep the window boxes growing well.  We’ve upped our game a bit now and are growing with the aim of having a constant supply of the special salads (e.g. radicchio, mustard leaves etc) as-well as cut-and-come-again lettuce/rocket. It may seem obvious, but keeping an eye on the plants is the main thing and most of the issues we’ve had could have been avoided if we’d been better with this all along…

Overall the money in (seeds, compost etc) vs. money out (cost savings/worth) is very good once the initial outlay the for the window boxes is paid off. Buying the seeds and seeing them grow is definitely a lot cheaper and more rewarding that just buying from a shop. The fresh salad also taste a lot better, there is less packaging and the carbon emissions will be lower.

We’ve been cycling the soil and looking into how to improve it/make it more appropriate for what we want to grow. We now always germinate the seeds inside after sowing inside (just by a window).  This seems to really help give them a head start.

Although I recently bought enough boxes for a second row and started hatching a plan of how to attach them, we just got a call saying we were being offered a local allotment! (if allotments aren’t something you have heard or know much about, here is a nice explainer.) We put ourselves on the list about a year and half before we were called, which is notably fast as often the waiting list is several years or more. Getting an allotment has really upped the magnitude of what we can grow and meant that our window boxes are now transitioning to be full of delicate leaves and a few herbs for salads as we can now plant anything more hardy on the allotment.