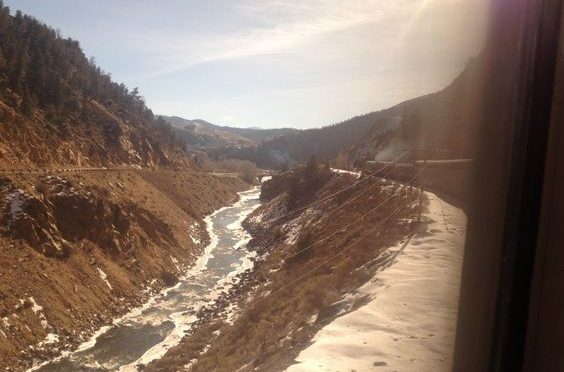 Trains won’t work for every journey and they don’t loop the world, even if the phenomenal cinematographic breakthrough “Snowpiercer” suggests they can (trailer linked here). However, they often could work. They are often cheaper with a bit of research, offer greater chances to see the places alongside the route (both out the window and on stops), more comfortable (leg room, ability to walk around etc), less stressful (no “check-ins” as such, lots of luggage allowance etc) and give substantially lower CO2 emissions. A huge plus for my partner and I is that, unlike driving, no one gets annoyed when you read a good book in transit…

Some people like flying. I have always had childish glee watching the wings every time I have taken off. However, I have always found planes uncomfortable (especially for longer trips), stressful, and find the irony of being an atmospheric scientist and flying often rather too poignant. Without spending too much time on the emissions argument, I would like instead to put time to the argument that trains could be an upgrade to many trips in terms of comfort, experience and holiday time.

Train travel logistics can be less than obvious to those who do not often use it, and even those who do. A good example of this is my partner and I’s trip to the Balkans by train, in which by just using the Euro-star site for our tickets London to Munich lead to addition £50 charge (We should have used SNCB after Brussels as soon as we were on a line operated by them or LOCO2). I have almost ubiquitously found that buying separate tickets from the country’s provider leads to the best prices, the answer is always to check a least a few providers website’s for the same service and the general sites like LOCO2.

However, with that said there are some phenomenal sites and blogs from people who know the score with trains. My favourite (and the favorite of many people!) is a site called The Man In Seat 61. I’ve tried to list (at the bottom) a few that we’ve found useful over the years, and will happily add suggestions.

Some professions end up travelling a lot. In academia, I’ve been sent to America once a year for the last 3 years which has rather ratcheted up my travel carbon footprint. I admit that, obviously, I flew across the Atlantic. But the USA actually does have a lot of good train routes (and buses too…) if you are travelling within the states and are willing to spend a bit more time on the travel. My decision to catch the train from Boston Massachusetts to San Francisco made me the subject of much amusement from my colleagues (especially the American ones!). Unfortunately the USA setup for train travel means they travel at a tiny fraction of the speed of their European counterparts (so the direct version of my trip would take ~3.5 days).  However, things like free WiFi on buses and trains puts us to shame in the UK. To do this trip you need to take holiday (only ~1 day if you included the weekend), but I really have to emphasis how much of a wonder doing the trip was. I’ve put a few photos of the trip below, however although the sights are incredible shots through train windows (or photography in general) has never been my strong suit.

Apart from the mind-blowing sight of a wolf in the wild whilst eating a (well priced) 3 course dinner in the dinning cart, just the scenery was enough. As Brit who has only been to the USA because of my PhD, I had not seen the USA and its vast and glorious landscapes. The university I was based at in Cambridge Massachusetts was surrounded by fantastic independent shops and the office I shared was actually with scientists from Switzerland and Denmark, suffice it to say I doubt this was representative of the USA as a whole (and after my train trip I know it wasn’t). Neither in fact were the 10 days I spent in San Francisco at a conference following the train trip. I cannot recommend the trip enough if you need to get from Denver to San Francisco (other USA summarised routes here). I guess the point I am making is that the train trip was a great way to see some of “real” America.

There is often an argument about driving being cheaper or easy. Sometimes this is valid in the UK due high rail prices, but often not. Certainly in academia when a lot of trips (e.g. conferences, talks etc) are organized in advance, advance singles are a good match.  Also, in the UK it is often cheaper and quicker to get to close Europe by train (e.g. Paris in 2h20, Brussels in 2h21, Lille in 1h22 etc…) by buying return fares not that far in advance. For instance prices to Paris from London start from £29. On our latest train trip, which was a holiday, we actually arrived into Brussels casually for 9am (UK time). I can’t easily describe my huge endearment to the Eurostar. It is both the big things (like how smooth the logistics work) and little things like dated (but in good nick) upholstery that is enough to transport you back in time, and really make you feel like you holiday or trip has started!

I am actually right now excitedly researching travel for my next work trip (to travel the weekend before) as I have recently been invited to give a talk at Copenhagen university (my 1st invited talk!). However, it is unfortunately a little complicated due to the recent cancellation of the Danish ferry to the UK. It looks like it with be as footpassenger on the ferry to Gothenburg, followed by a train from from Gothenburg to Copenhagen.

By combination with a through deals like “rail and sail” (Which includes any east Anglian train station to any Dutch station – like Flussinger, which is a few Euro ferry and few minute cycle from Belgium), there are lot more travel options (e.g. Bilbao… ). The “rail and sail” option used to be closer to £20 each way a while back, but at £34 from your door it is frankly still a steal. Just think about cutting out all those airport lounges, stressful queues, expensive transfers (ad nauseam…) and just boarding your local train station with a bag and a book. The standard arrival into the centre of cities is huge boon for holidays and work travel (again saving the transfer time,  which with many budget airline airports is frankly ridiculous, and costs. )

We’ve also done quick trips from York to the south France (Eurostar to Avignon, cycled the rest). The similarity times from York to London, York to Edinburgh, and London to Paris really raise questions why anyone would fly UK to Paris. I am so surprised when I frequency here of people doing this, especially from York.

The big eye opener for us recently though, was getting the to Balkans by train. It was a painless trip to Munich in fancy new trains (with a pretty LED speedometer casually reminding us we were at ~250 km/h or faster!), with a lovely evening walking round the city and eating Bavarian food with a friend. Then just another simple trip to Ljubljana (which can be done by bus or train).

The kicker? the cost out was less (£118.75 pp + 1xtransfer, London=> Ljubljana) than the flight back (£133.90 + 2xtransfer, Split=>London). Admitted this was on BA, and took substantially less time. I could have got both the trains tickets and the airfare for slightly less with more advance planning, and arguably we could have taken a budget airline (and paid the extra costs for luggage etc). But there is only so much time…

There are lots of people who are fanatical about trains, but we just use them to get from A to B and enjoy our longer trips in them. I would strongly argue that most of the time When comparing costs of flying and trains, all costs and times need to included (baggage, transfers, parking). These considerations obviously apply for smaller trips too, and there are of course the arguments of time, experience, and carbon footprints.

Although we have only recently had our eyes opened to how cheap and easy it is to get to the Balkans via train, we have been using them for a while now and continue actively choosing them in the future. As firefly’s Shepherd Book says, sometimes “how you get there is the worthier part”…

Disclaimer: I am not a travel agent and I have tried to be as accurate as possible. However information will change and I would advise double-checking any information before acting on it.