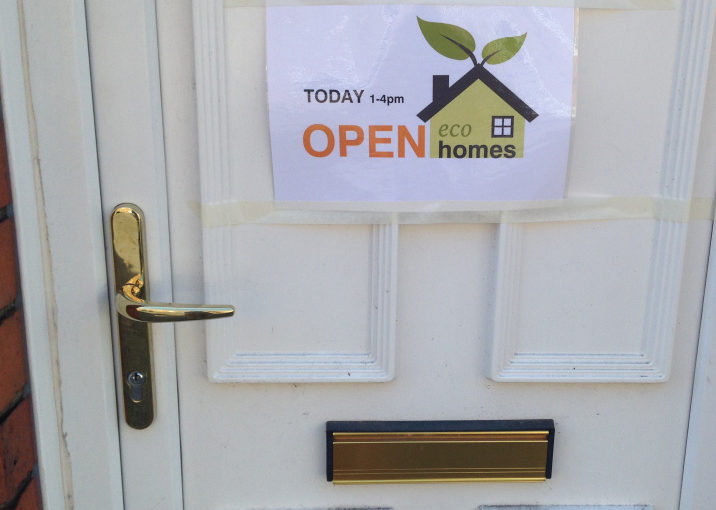 We’re part of York Green open homes this weekend! If you are about York, come see what “eco” measures people have done! These include from a “Passivhaus” under-construcion (more about passivhaus), 1960s council house, a 1930s semi, detached, bungalow, and many more. Green Open Homes is a national project and they have a even have a nice video intro of the project.

Frankly, flattered doesn’t quite cut it to explain how we feel about being asked to do Open Eco Homes. Our project is a lot smaller budget than a lot of projects you hear about. For the event, we’ll be showing how we reached our goal to take a thoroughly normal terrace home in York from a “D” to “A” grade (EPC) eco home for less that 10% of the value. We’ll show how we achieved that and also made our house a net exporter of electricity with low bills. There’s another aim we always had but didn’t mention often; we wanted to make sure it was still a “normal” home. One that we can live in comfortably, and be eco without having to drastically change anything about our lifestyle.

As the hosts (@StNicksFields) say: “Find out how to turn your house into a comfortable and efficient home from people who have done it!”

Us: We’re Not Hippies, Honest

Both of us have long been interested in the environment and technology that reduces our impact. That’s based on our concern about climate change. But being a scientist and an engineer, we’ve often noticed that we’re much more interested in the cold evidence than the sentimental stuff. You’re more likely to find us obsessing over doing our recycling correctly than getting upset about pandas.
This means we sometimes choose different paths to an eco lifestyle. A good example is being vegetarian – we’re not. A lot of our friends in the eco world are; some for ethical reasons, some for environmental impact. We like eating meat now and then so we’d find giving it up unenjoyable; instead we eat meat infrequently, and eat less of the most environmentally detrimental meats. Using the information we have, we can reduce our impact without having to change our underlying habits and lifestyle.
So this means we need an eco home where:

Most of our blog topics have been info-heavy and focused on the numbers. This one catches us in a thoughtful mood as our Eco Open Homes weekend approaches and we start talking about what we’ll tell our visitors about what it feels like to live in a home like this.

Our “Eco” Home
The goal of this project was to convert the cheapest house we could get in York to a “A” grade (EPC) eco home for less that 10% of the value. We essentially achieved this. Due to cosmetic choices and additional non eco measures (like our FSC oak floor + relaying backyard with our reclaimed victorian tiles) it may end up being closer to 15%.
The project has involved some big changes such as installing solar power panels, insulating the floor and dealing with damp problems, and some smaller changes of insulating and draft proofing the house and installing a chimney pillow.
What’s it like to use electricity in an eco home?

Well, in 2014 we produced 3.4 MWh and in 2013 we used 2.6 MWh. So overall, we’re producing 130% of what we need. On the face of it, we’re golden. If we assume out consumption is constant and you look into it a bit further, it’s more likely that a portion of that 2.6 MWh came from the grid when it wasn’t sunny. So we sold spare units at sunny times, and bought National Grid units at others.

So we’re happy with the total amount of power we use. We do the sensible little things; we switch off stuff at the socket when we’re not using it. We hang clothes on a line instead of having a tumble dryer. But we keep an appliance others might identify as wasteful; a dishwasher. We just like it too much. Our routine is to wash up by hand, but when we have guests or have a big elaborate meal and then feel lazy, we love having that dishwasher. Over the year it looks like it’s OK really, so although we discussed ditching it we decided it wasn’t necessary.

The main change we made when the PVs were installed was not what we did but when we did it. It’s better for the environment if energy used in our house comes straight from the PVs, directly displacing a CO2-heavy unit of grid electricity. If we use power at night, we’re taking an eco hit twice; once because we’re getting grid electricity at a higher emissions content, and twice because we’ve sent our sunshine power to others via the grid at a noteworthy transmission loss; ~8 % doesn’t make it to the other end. That’s rubbish.
So, the washing machine and the dishwasher go on in the daytime. High energy stuff like the kettle and the shower are going to consume more than the panels punch out whenever you do them, but daytime is better, and when a wash isn’t on is better still.
There’s more we could do; we have an average kettle and an average shower and they use a lot of power. The shower is 8.5 kW. And we are both too addicted to long hot showers to ever get a shower timer. But we’re honest with ourselves that we enjoy these luxuries and we want to keep them.

What’s important to us is we never, ever have to say “you can’t turn that on”. We just get on with life as normal. You quickly forget why laundry-time is about 11am when the sun will be high and it’s just habit. We use our laptops a lot and have a constant tea-making operation going on. When we break 20 kWh in a day it makes us smile, but if it’s a rubbish

We like that any set of people could move into this house, and without changing a single bit of behaviour, they’d have a massively decreased electricity footprint.
With the recent developments in home storage batteries, Tesla PowerWall being the most widely-promoted, it could soon be even easier. 10 kWh storage provides 10 x long hot showers, maybe 60 x boiling the kettle. 2.6 MWh a year averages to 7.1 kWh a day. So this battery would instantly take our house off-grid for a long stretch of the year, since it could provide a day to two day’s power even if PV output is very low. Based on our 2014 generation data, we think we’d have around 200 consecutive days entirely grid-free; we’ll be able to calculate this better once the new Open Energy Monitor is installed. We’d only need to take from the grid in the depths of winter.
Is an eco home cold?
No, ours is pretty cosy. Because it’s insulated so well, the sunshine and the people tend to warm it up ok. We keep our gas boiler off completely between mid-March and mid-October. It doesn’t cause a problem. We have two little low-power electric heaters, 400 W each, which we specially bought to suit the PVs. If it’s a cold but sunny day, first port of call is to switch these heaters on to top things up. We’ll pick a room or two we’ll mostly be in for the day and just heat that area. When it’s a small house anyway this isn’t particularly difficult to accommodate.
If it’s both cold and overcast, we make use of the boiler. Because we both work full-time, it’s on a fairly restricted timer, and then controlled with a thermostat. We have a wireless one you can take with you. We carry it about so the temperature is set right for where we are.
Since our old boiler packed up and we got a new one, we’ve had new thermostatic flow taps on the radiators. They haven’t been very useful though, since if you change it and then move rooms you have to alter the taps set up again. We don’t really see the point, and we don’t really use them, they’re just all set the same.
It’s worth saying, our preference is for a moderate temperature in the house. We dislike having a home heated really hot, and we have both cultivated exquisite jumper collections we love to wear.
Sometimes our guests want the place hotter than we’d set it up. We will happily turn the boiler on outside of normal months for their comfort, and since the new boiler’s been in, it’s easiest to just hand them the wireless thermostat and say “set whatever you like”. It doesn’t make a big difference to the overall picture, it’s our day-to-day habits that influence it more.
What are the bills like?
Basically energy bills don’t exist for us anymore. We use about £25/month of grid electricity, and about £10/month gas which is heavily in the winter and obvisouly pro rata’d.
FITs and export tariff payments are made quarterly. Obviously they vary depending on generation. But it’s always significantly more than the energy bills.
So overall our house doesn’t cost us money to run, it looks after us.
Dealing with the rubbish
In the house, we recycle as much as possible. Our council pick up recycling for paper, card, plastic containers & caps, glass, and tins. There’s no food waste collection, but we compost our raw food waste/teabags for the community garden down the road. We collect up more unusual recyclables over time and take them to the main centre now and then; tetra pack containers, small electrical items, batteries, bits of metal, bits of wood. Old furniture goes to the community furniture warehouse or up on Freecycle. Old clothes go to the charity shop or the cloth bank if they’re really knackered. We’re in the habit of making use of packaging again in the house where we can.
By recycling everything possible, you become aware of it when you’re buying things and try to avoid them or only buy the minimum you need. So examples of stuff that’s a pain to dispose of responsibly  are paint/highly volatile chemical items, things that are not possible to disassemble like metal items moulded into plastic, food with tons of packaging particularly if it’s got foams, and cheap electronic items that won’t last long. Sometimes you have to buy them but it’s good to avoid just accumulating unnecessary stuff.
What goes in the general waste bin is mainly cooked food waste, plastic films, plastic-coated foils (like crisp packets) and expanded foam packaging. Actually food packaging and food miles/seasonality would be the next big thing to act on to continue getting our carbon footprint down.
Was it worth it?
We started this as we were fed up with what is described as affordable housing being completely not so (about us page). The money costs were largely as expected, the time costs were pretty high. It meant months of living in a not-finished home, of organising every detail of the bought-in work, and painting or sanding or sawing every night as soon as we got in from work. Occasionally we got really frustrated by it. But we’ve met our energy and cost goals, whilst making the house a cosier, cheaper and more sustainable place to live. We also got the chance to make a comfortable home that’s just right for us, and we’ve found it’s far easier here than in any rental places we’ve lived to follow an eco lifestyle even when you’re really busy. We think this place is set up so that anyone who lived here would be more eco even if they didn’t really think about those issues. We’ve always believed that living in an eco house should improve your quality of life too, and we feel like this house does that for us.
Yes, it was worth it!
Links