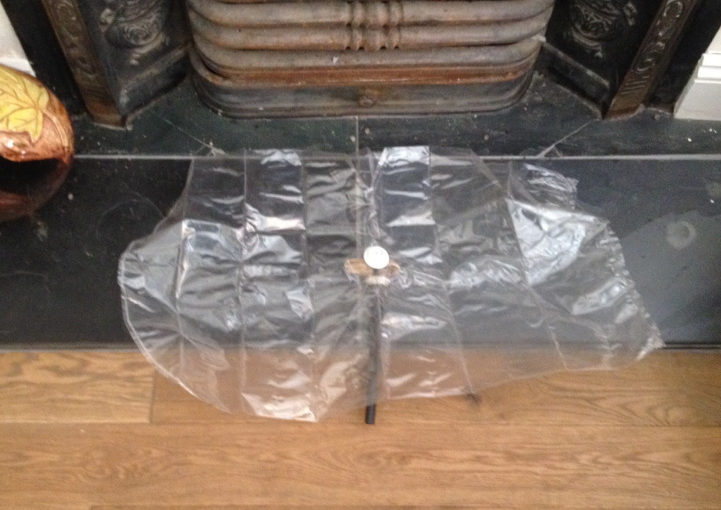 In the run-up to the York Open Eco Homes weekend, we’re getting a few final jobs done that we’ve been meaning to do for ages. One of those is to block up the chimney with… a chimney pillow!
It’s tricky to block up old chimneys completely, because the years-thick coat of soot gets salts into the bricks. Salty bricks pull in water. Whilst your bricks are ventilated by an open chimney it’s no problem, but if you just blocked the air off then it’d be bad news; the damp can get pulled through to the inside wall, and that’s how “grease marks” on the chimney breast happen.
However, we want our chimney stoppered up since we don’t use the grate, and it just lets cold air into our house. So the solution is a chimney pillow. It blocks off the draught but allows a little bit of air to pass, enough to stop the bricks getting damp.
Installing a Chimney Pillow
It’s a pretty simple item which looks like a giant whoopee cushion. You unwrap it and give it an initial puff just so it’s easy to stuff up the chimney.
At this point I realised that although the mouthpiece had seemed nice and simple initially, in practice I would need to stuff my head up inside the grubby horrible chimney and get puffing. Rather put off by this, I cast around for other ideas. Luckily help was at hand…
cialis generika kaufen schweiz…and gave the pillow a good pump up with the bike pump. Once the pillow feels firm, you close the tap and there you are.
The pillow seemed to want to slip down on our fireplace, even though it had been stuffed through into the flue. However it’s blocking up the opening OK and isn’t visible from outside the fireplace, so I’d say that counts as mission accomplished.
This took about 15 mins to install, and cost £25. I think we probably would have been OK with a small rather than a medium.
Anything else to know?
The pillow can deflate over time so you’re supposed to check on it every 3 months if you’re not using the chimney. We’ll re-check this one in a week or so since it’s the first time we’ve used one. If you are an absent-minded sort and might put a chimney pillow in, then light a fire under it, the instructions reassuringly advise that the thing will shrivel up and drop out of the chimney, but not catch fire. Punctures can be repaired with Sellotape according to the instructions.
We’ll see if it needs taking out during storms with high winds, which could cause high suction in the chimney. It can, on occasion, be very windy where we are so we’ll find out.
Does it work?
We’ll only really use the pillow during the winter,  so it’s a bit early to tell. It seems to. Our boiler is off now so we won’t be able to track any gas bill change, but it’s a low-cost low-fuss improvement and it should make the living room quicker to heat up.
Links