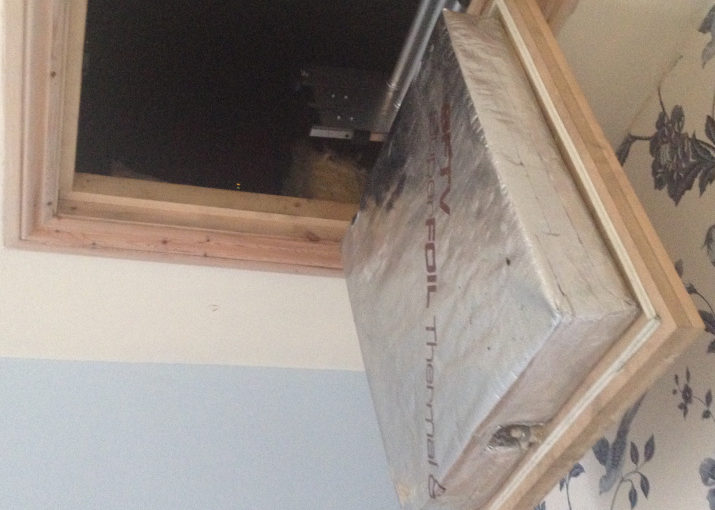 Our House was Full of Holes!

The house had rather better ventilation that we would have liked when we got it… due to a hole in the roof! So that was obviously first priority. Seriously though – just walking round the house and holding a ear or a hand to gaps you can hear where you heat is escaping. We obvisouly need airflow to be able to breath and avoid damp buildup, but in reality the old terraces are extremely leaky and that air is carrying money spent on heating a house with it.

The double glazing and uPVC doors were installed a couple of years before we moved in, which is a major and costly part of most retrofits. Although aesthetically these don’t appeal to everyone (myself included), their thermal and draft performance really do beat the wooden doors typical of a house of this age.

The real decisions we had to make were on how to avoid losing precious indoor heat from the house. The power of controlling the flow air and exchange with the outside is huge. If our project were larger we would have probably invested in mechanical circulation combined with a heat exchanger (like these people did); this kind of system give you all the benefits of a leaky house in terms of fresh air and humidity but without the extremely costly heat loss. However, we choose the simplest and easier options to keep the project on budget.

The easiest and cheapest stage in any retrofit project is loft insulation. It has short payback periods, you can buy it cheaply from any hardware company and at the time of writing you can get free loft insulation installed if your house doesn’t met the standard (links at end of article). For us the loft insulation needed topping up by ourselves at small expense as it hadn’t been done properly and we didn’t quality for any grants.

If you have cavity walls, again currently the easiest route is a single phone call to get cavity wall insulation of the government’s energy company obligation ECO scheme. There used to be some scepticism about this as with all “green” technology, but for typical houses the consensus is clear that this is the cheapest and best option. We had the extension done and this took a few hours with little effort under the ECO.

If you have solid walls (like us for the main building) then the question is rather different. Solid wall insulation is costly, but considering the massive amount of house stock for which this is currently the best option it is being funded on and off by the government by schemes including GDHIF (here is a worked example with the grant). It is worth checking if any funding is available whilst if you are thinking about doing any work and I would recommend YouGen as the place to start checking. Solid wall insulation for the two external walls of the house would have been a great option, however we missed the funding window during our works and at the time it was unfortunately out of budget.

Whilst re-laying the loft inulsation we released the extent to which the loft hatches were just vents for hot air. There were simply un-insulated boards with gaps, this would have had a massive effect on heat loss. Our approach was to re-board the ceiling to create a new loft hatch, fill up the previous one and insulate both.

Other places you could hear air escaping were by pipes passing through walls where a gap was presen the material would make a gap when expanding or contracting with temperature. These kind of air leaks were solved simply using silicone sealant or expanding foam.

We had 3 vent covers downstairs, which when removed really showed the horror of hole size in the walls of the house (photos below). The amount of air that would escape through these would be huge. The controlled/”active” air flow was argued to be the best intermediary, compared against managed/mechanical ventilation by those we spoke to and it makes a lot of sense. Although humidistated fans were mooted as a first option, conversation with people who had installed them lead us to the conclusion that a switch linked to the shower was best. So we installed a single iris fan for the extension to control the humidity. During the summer the windows are often open so it is of little relevance, but it is important to increase ventilation in the winter.

The vents look the same now, they are just filled with insulation and aren’t costing us money.

The bathroom is vastly nicer now with the new fan (photo below), and very much less damp. As the decision was mad to have a single fan, the timer is currently set for 30 minutes and it can also be turned on whilst using the kitchen.

Now we have a single "active" controlled fan for the kitchen and bathroom, really cutting down on draughts! pic.twitter.com/is9ZIUQ2cS

Our house has become less cat friendly. However, by insulating the cat-flap and vestigial vents with kingspan it is obviously noticeable the difference in the drafts.

Of our two fireplaces, one is sealed and the other remains an open flue. We’ve bought a chimney balloon too, and this is only used in the winter to cut out heat losses.

Did it Take Lots of Effort?

These are small changes. They cost very little and make a large difference. The external wall insulation would have been the largest expense if we had done it, but it would have been done by contractors so it wouldn’t have been much effort on our part. Still, the most effort was in installing the loft insulation and insulating the vents which took at most a few hours.

If is possible to achieve a lot more than we have here, and there are lots of great examples on the low energy building database (LEBd). Many people have achieved houses that through design or retrofit do not require heating

The key thing is to remember to still keep the place airy and keep a note on how humid the it is and whether any damp problems exists or are developing, if they are then further air circulation is need. We track this using an arduinio linked to our energy monitor. We’ve not had any issues, but if we do I will install a second fan that would be constantly on and have heat recovery.

– Passive House Trust (PHT) – the UK national body, which has lots of information and links up