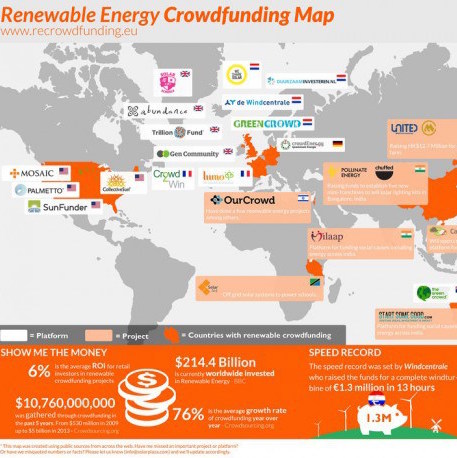 This article is a little intro into buying into renewable projects from ~£5 upwards. Its something that I’ve been involved in for a while now and feel it has enormous potential, with billions per year being raised through crowdfunding. I often meet people who are interested in crowdfunding, but rarely people who know about the application to renewables.

Renewables now provide 17% of UK electricity consumption (2013 data), with the majority of this from coming from the big six. This control within the market doesn’t exactly work for the consumer (nicely overviewed by this FT article) and it has led to a large amount of press coverage. This is continually brought up in government time and calls have been made to make the “big six” the big 60.000 instead ( e.g. from the Energy Minster Greg baker) . What if we as individuals in the population had a degree of ownership of this new energy generation? (e.g. fig. 1. >50% of share installed capacity in Germany in 2012) Could we direct more money into our communities? Would we feel more involved in tackling climate change? Could we increase the construction of renewables?

Performance of renewables and our policy driven goals mean that as well as the environmental motivations, from a business or investment standpoint renewables are great idea (A Government Minster even recently said “Solar panels [are] better than a pension“). This is further demonstrated by the press coverage and strength of the reverse argument: divestment. Here i’m going to run through the general money case and how to get involved and won’t cover the social and environmental side.

What if you don’t have space for PVs etc?

Due to renting, living in flats, urban locations or unsuitable roofs not all of us can have renewables on our own roofs or in our back gardens. However being part of the process of decarbonising our energy is something more people feel motivated to do. There are lots of worthwhile changes we can make to energy use in our houses, and this blog is charting our exploration into those, but importantly the choices and influence over energy delivered to our houses is also becoming within  grasp.

We can choose suppliers for our homes that aspire to reduced carbon content/100% renewables ( e.g. Cooperative Energy/Good Energy) or actively work to build renewable infrastructure (e.g. Ecotricity). Regardless of your position on energy generation the contribution of energy we use in our homes is ~30% of national electricity consumption (fig. 2) and energy generation is clearly going to be close to home for a lot of us in the future. Our little renovation in Yorkshire for instance is close to proposed/operating wind turbines (e.g. Private: Knabs Ridge; community: Blackshaw Head,  Grimethorpe and Cudworth, Norton) and fracking exploration (Kirby Misperton); so getting actively involved becomes a much more present and proximate issue.

Investment… don’t you need lots of money for that?

Micro investment in renewables is where developers of energy projects raise the capital by lots of smaller “shares” to interested members of the public, rather than seeking larger amounts from fewer investors or banks. Billions of pounds have now been raised through crowdfunding by sites like Kickstarter, and it is a now an established investment model globally for renewables (fig. 3). Shares typically start from £5 upwards, and both community and private projects have gotten off the ground.  These projects generally have projected returns/ROIs of 5-7% or above, which is much higher than usual high-street cash rates (e.g indigenerics.com. ISAs/Bonds etc). Typical recent examples are 6.65% IRR ( PV – SunShare) or 8.4% – 9.3% IRR (Wind – REG High down). The way they operate tends to be through raising initial capital through share or loans to setup the renewables and then the income is generated through selling the electricity and government payments for generating the electricity (FITs) pay the ongoing costs, community contributions and returns to investors. The play-off for the higher rates is due the decreased access to the money for the duration of the investment, longer terms (normally ~3-20 years), the return often is un-guaranteed, the capital is at risk and there is a lack of transferability (shares tend to be exchanged via mediated offers, dependant on buyers). Each project is different, and the terms will alter so weighing up of pros and cons has to be done on a project by project basis.

Interesting, how established is it and is it for me?

Being part of renewables is now a choice open to all, which is starting to revolutionise the energy market and proving a game changer for schools, communities and companies. Although direct ownership arguably leads to the greatest returns if plausible (as I discussed a little when we installed our PVs), utility scale renewables are cheaper per kWh, and offer greater capacity and value to the consumer. Below are some related links including the main UK platforms and serval examples of projects being funded or just getting up running, and long term established projects.

Here are further some refs/links:

Disclaimer: I am not a financial advisor and do not work in finance. This article links to research/information I’ve found and expresses my own opinions and experiences.I hope it is useful to you but in no way am I offering financial advice or recommending a particular course of action. If you’re considering any investment you should seek information from a wide range of sources and speak to an independent financial advisor before making any decision. I’ve tried to be as accurate as I can, and when prices have been quoted those were available openly on the date of publication. If you see any errors/broken links/have any comments please just drop me an email or comment.